The winter edition of Menacing Hedge is graced with the work of seventeen stunning writers, one provocative photographer, the haunting work of a beloved pop-surrealist, and an intense poet-on-poet interview. Many of the writers have recorded readings of their work and these are well worth a listen.

Dana Guthrie Martin interviews Margaret Bashaar about her recent chapbook, Letters from Room 27 of the Midway Hotel, from Blood Pudding Press. The interview contains beautiful images from the actual hotel as well as a bonus poem by Bashaar. Please be sure to take time to listen to Bashaar's reading of her poem, Meditation on Ichthyosaurus at the Carnegie Museum in Pittsburgh, PA. Separately, and aside from her interview with Bashaar, Dana Guthrie Martin offers a clutch of quiet, expertly crafted poems. Martin's poem then explores becoming and undoing while her other poems lead us to places found in the landscape and within our own interiors. Jeff Encke writes with a surgeon's precision, examining small details of the world, from the nature of social life in they are overawed beasts to claptrap and jabbering in about the eggs we have laid.

Rita Feinstein explores the unhappy places of the body, from anorexic hunger in The Anorexic Bakes Gingerbread to a protagonist who presents her own body for cannibalism in Café Corazón. Laura Gamache offers up startling transliteration poems based on her purely intuitive translation of the works of Eeva Kilpi, a Scandinavian poet. She wrote the poems while her husband was undergoing treatment for cancer. The poems are innovative, with chilling juxtapositions of images and ideas. Cheryl Anne Gardner's Choke is an unsettling story from the point of view of a child growing up in a seemingly cannibalistic family that dips into the magical realism of childhood. Her reading is particularly evocative and worth checking out. In Of nightmares, witches and monsters, L. Jordan James presents an insightful peek into the world of Alzheimer's disease, and of the love and compassion between two friends dealing with the "demon."

Anne Kilfoyle's heartbreaking story, Finnegan Repeating, plays out in an aquarium and the everyday struggles and difficult challenges that confront its habitant fish. Kate LaDew's short story, And No Mute Unpunished, begins with an office birthday party that spins out of control. Ray Succre's muscular poems are filled with mammals of land and sea, birds and fish. No one should miss listening to his poem At the Gelid Hotel, which tells of a love story between two walruses and features a delightful soundtrack. James Valvis' The Death of His Penis is a tragic but funny poem about just that, followed by Report, a piece about reckoning. In three stark photographs, Cristi Cain comments pointedly on the nature of the relationship between government and its citizens.

Rachel Van Blankenship's poems are replete with animals, physicality, poignancy and death. Her shivery poem, Her Hamster Devoured Its Young, is presented in adult form with another earlier childhood version, Muffin, featured in Scary Bush. MP Powers' epic poem, Buchenwald, about Goethe carrying the blood of Christ up Ettersberg Hill, offers a fascinating story of history and the events of the middle of the last century. Kiara McMorris' poems represent a young fresh voice that is not constrained to the usual boundaries of poetry. Her poem The Mississippi Two Step Blues peers out through the eyes of her grandfather and his life. Her voice shines an unblinking eye on the particular problems with life and social politics. Kathryn Zurlo's poems are beasts of their own. In her poem, Open Mouth Insert Human, the interior of the house, becomes the interior of a body, where "Flaps of skin-colored sheets closed off the three bedrooms. I peeked behind one; blackness and shredded rug stuck out its tongue." The remainder of her poems are equally visceral. Dustin Michaels' deep south set, The Ruined Fountain, begins with an alligator and an ancient black woman and then spirals downward off of the protagonist's porch. Brenda Nicholas presents a period piece poem from the 1920's, Bird Cage, followed by cosmopolitan insights into modern romance. In Aversion Therapy, Fred McGavran tells the story of the slow decline of an established but fading marriage, from the point of view of a protagonist who provides a clinical description of its downfall.

Finally, last but not least, we have the artwork of the pop-surrealist, Mab Graves, whose piece Dorothy Darkly adds the atmospheric quality this edition so deserves. We also have a piece she has written which provides insight into her manifesto. A manifesto this editorial staff heartily endorses with respect to all forms of creative expression.

This edition was produced by:

Dickens: Chief of paperwork interference and specialist in rendering all untethered small objects to the Taking Things Place, wherever that is.

After horrible agonizing, we are proud to present to you Menacing Hedge's Pushcart Nominations for Best of the Small Presses. These reflect works published prior the 2011 Pushcart deadline, which was December 1. We wish we could have nominated everyone, but alas we were limited to six. 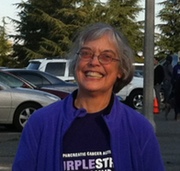 Martha Vallely has been working as an editor for over 35 years, primarily in the legal field. She thinks of editing as a word game version of "What's wrong with this picture?," and she loves to play the game. She enjoys the specificity and concreteness of legal editing balanced and complemented by editing Menacing Hedge, which is less structured and lightens everything up, giving her a different perspective on language, its uses and magic.

Martha came to the Pacific Northwest from New England and will be returning to New England when the right time for retirement announces itself. In the meantime, she loves to write poetry, paint watercolors, and ride a bicycle in Seattle.

Menacing Hedge is a quarterly journal of poetry, fiction and artwork, which is committed to fostering access to emerging and experimental poetry and prose. Ongoing publication is scheduled for the first weeks of July, October, January, and April. Menacing Hedge will carefully archive all its editions to ensure that an author's/artist's work will remain on the web for many, many years to come. Regrettably, Menacing Hedge cannot pay its contributors at this time.

Menacing Hedge accepts only original unpublished literary work; however, it will consider literary work on a case-by-case basis if it has appeared only in print but never on the web. In the case of art and photography, it is acceptable if the piece has appeared on the artist's website or elsewhere.

If we decide to accept your work, we will also invite you to submit one of your most cringeworthy efforts from the misty past to Menacing Hedge's evil twin, Scary Bush. Please see the Scary Bush page for examples.