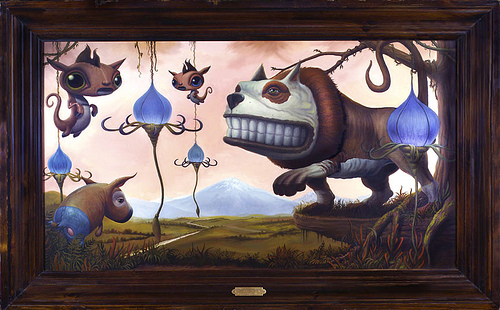 Image from scottmusgrove.com. Used with permission (thank you, Scott! -ed.).

Excerpt from The Late Fauna of Early North America

What Have We Here?

Each painting in this volume depicts not so much an individual animal as it strives to present an example of the species in its natural habitat. However, even by depicting a 'generic' representative of the species, we can't help but see in it a singular animal with a singular personality.

Is that personality really there, or do we imagine it? Are we incapable of turning off the part of us that wants to see familiarity in even the most alien of species? Again, take the Booted Glamour Cat as an example. When we look at this painting, we don't just see a type of animal, we see an individual who, if alive today, would certainly enjoy long walks on the beach, horseback riding, a fine Cabernet and eating toothpaste. We can't assume that all Glamour Cats would enjoy such things but we know that this particular Glamour Cat would. So we can't merely think in scientific terms about these animals. They were individuals with their own hopes and dreams, just like you and me. My dream was to be a dancer, but like the Glamour Cat, my dreams were dashed with a few crushing blows … in my case by Glenda Weinberg.

Since all we may have left of some of these animals are partial physical remains, we must do our best with what we have. We have Science and we have Art. And from this we must bring these beasts back to life.

Life. So, what is it then? What is it when, say, a Pelagus Bellua Bardus stamps at fish in the shallows and tosses his lustrous mane in the breeze of an approaching storm one moment, and then, an instant later, after being struck down by the hunter's bullet, he is an altogether different thing? Where once was 'life' and motion is now but a lump of flesh and fur. It weighs the same, takes up the same volume of space but yet something is missing. It is less, much less than it once was. But what exactly has disappeared? And why won't it come back?

This is my mission; to bring them back, if only in paint.

A Day in the Life

A man whose name is now synonymous with conservation, John James Audubon, was in his day, a great murderer of beasts. An average day for him went something like this: He'd rise before dawn for a breakfast of dog eggs and whiskey. Then he'd grab his gun and set out to kill as many birds and beasts as possible before 10am. Then he'd head home for a nap. After lunch, he'd pose the dead things in as lifelike a manner as possible and paint them back to life in a scene as pristine as the one he'd yanked the animal from that very morning. Morbid? Yes. Practical? Again, yes. And so it goes with my endeavor, except that I attempt to bring these animals back, not just from death, but from Extinction itself.

"What is a normal day like for me?" you'd surely ask upon making my acquaintance. Well, like Audubon, I'm up early, but I prefer coffee and a Danish. Then off to the living room for a nap until mid morning. So I am very careful in this manner to cut out the whole entire killing part of my day. Then I don my dungarees and fold up my living room sofa and head out to dig: beneath a freeway underpass, on a golf course, beneath a municipal pool. Wherever my research leads me. My assistants and I work with no regard for the weather, no regard for our own safety and very little regard for city ordinances. Back at the lab we carefully catalog the day's discoveries. After countless hours spent recreating the newly excavated animals, I begin painting.

Bonus Images from The Late Fauna of Early North America 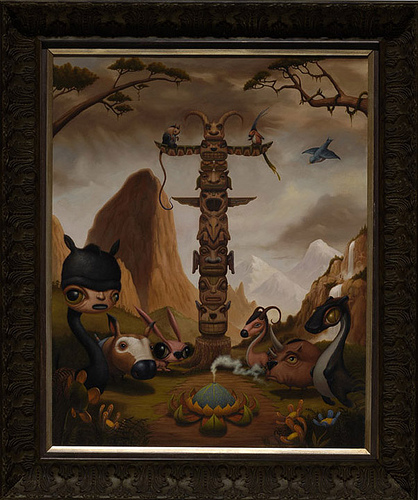 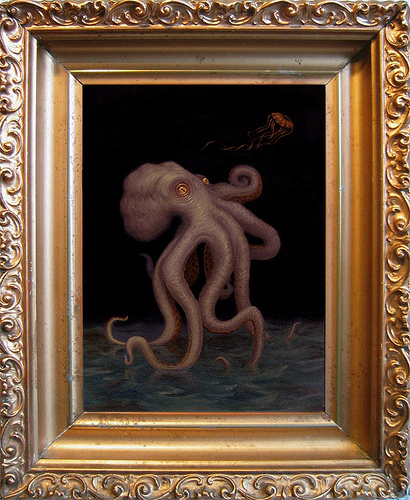